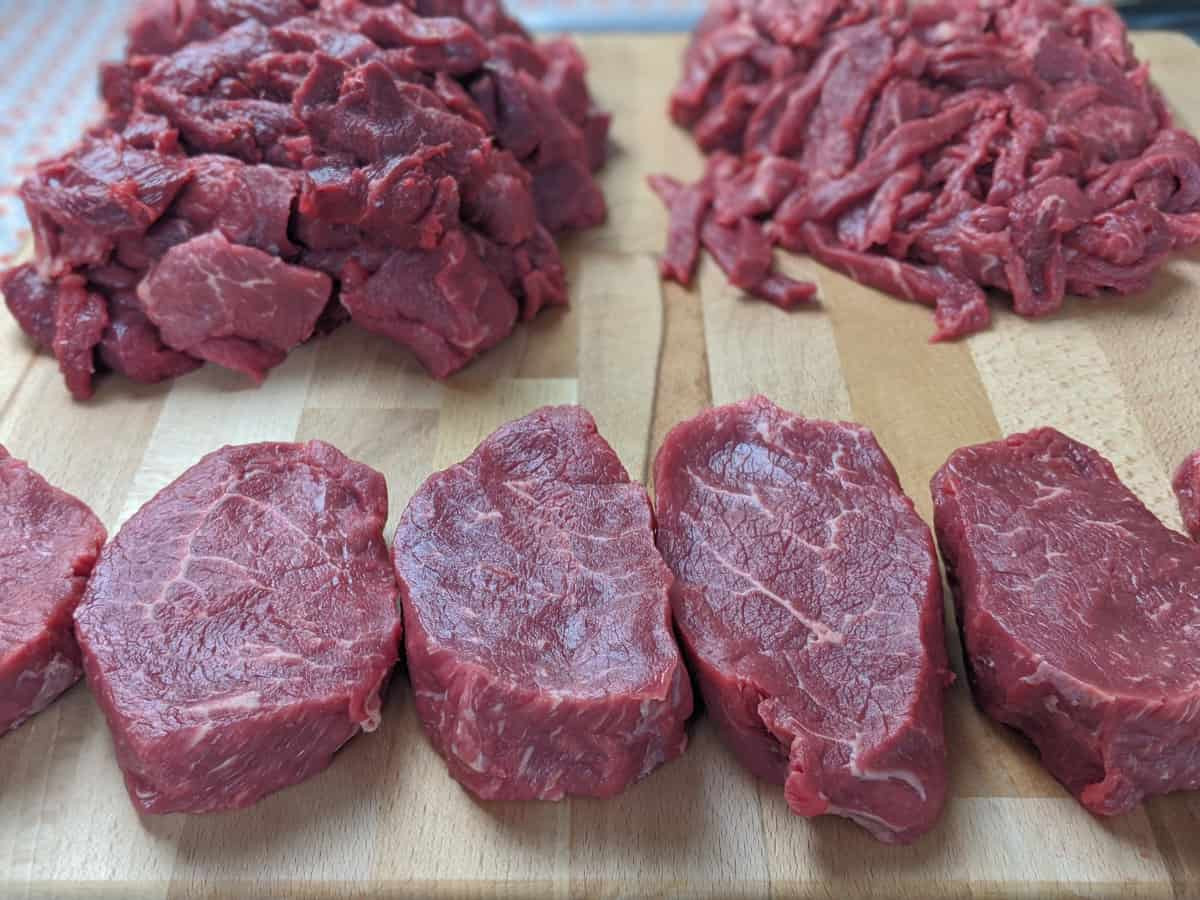 The beef knuckle is a sub-primal from the beef round. It weighs from between 4 kg to 6.5 kg, depending on the carcase weight.

The knuckle goes by many names: The ball of the round, sirloin tip, round tip, tip center (centre in UK and Ireland) and sometimes thick flank, beef ball tip roast, sirloin tip roast and French roll roast (there are different names around the world). Confusing, isn’t it?

After the knuckle cap is removed this is a very lean beef cut.

What is the beef knuckle?

The beef knuckle is a very versatile beef sub-primal cut and a great source of lean beef.

There are four main muscles in the Beef Knuckle.

The rectus femoris, vastus lateralis and vastus intermedius, known to customers in the USA as the tip center, tip side and tip bottom.

I mention them here for completeness, but in the real world, we use everyday terms.

Mind you, each country has different names for these muscles so it can get kinda confusing after a while. I’ll use photographs to give a better understanding of what it is we are talking about.

Muscles in the beef knuckle

This is the muscle that is attached to the femur and has a fair bit of fat and gristle that needs to be removed. It also has a layer of connective tissue from where it connected to the femur. When trimmed, this muscle is great for lean mince (ground beef).

This one is a solid lean piece of beef with a thin outer covering of connective tissue on the outside and a thick silverskin on the inside. When it is completely trimmed, there are many options for his cut. Diced for stews, casseroles, beef bourguignon. Sliced thinly for minute steaks, sandwich steaks, Philly cheesesteak or cut into strips for stir-frying or beef stroganoff, it is an excellent product. You could roast it, but you would need to add some fat to the outside because it is very lean.

This is the best muscle of the group. It could be roasted, with a layer of fat added for flavour and moisture, and it has really lean wide-ish slices, so very good for portion control. The inter-muscle connective tissue does not need to be removed as it will melt during roasting.

The bullet can be further subdivided by cutting along the thin silver skin to make two smaller cuts. If these cuts are matured for long enough, say 14 to 21 days, they are very tender and full of flavour. The thicker of the two, if tenderised, is as tender as some of the premium steaks and the thinner piece makes really good beef strips for stir-fry. Tenderising steaks using a Jaccard tenderiser is a useful method of breaking down the fibres of meat prior to cooking. The unit has 48 needle-pointed blades that cut into the muscle and leave the meat softer to the tooth and create a better eating experience. The Jaccard tenderisation also allows more marinade to penetrate the meat, giving a lot more flavour to the final product.

You will need a sharp knife and a bit of practice to separate all the muscles neatly and efficiently, but it is a worthwhile exercise to be able to produce such nice cuts from a large piece of sub-primal beef, weighing between 4 and 6.5 kg,

There is a bit of trimming involved in removing the silver skin from each piece and the trimmings can be used in beef stock making or for pet food.

You can cut steaks without dividing the muscles and they are quite good but to really get the best from your beef knuckle I recommend you divide it into its component muscles and remove all connective tissue.

In the video, you will see how to separate the muscles, how to trim the connective tissue and fat away and how to cut into steaks and strips.

This outer layer has a small piece of meat but mainly consists of dry connective tissue that should be removed.

Using a sharp knife, take off all connective tissue and fat until you have totally red meat. Slice, dice and strip until you have the knuckle completely broken down to your satisfaction. Pack in manageable quantities in freezer paper (not clingfilm) and label and date each pack so you will know what you are defrosting.