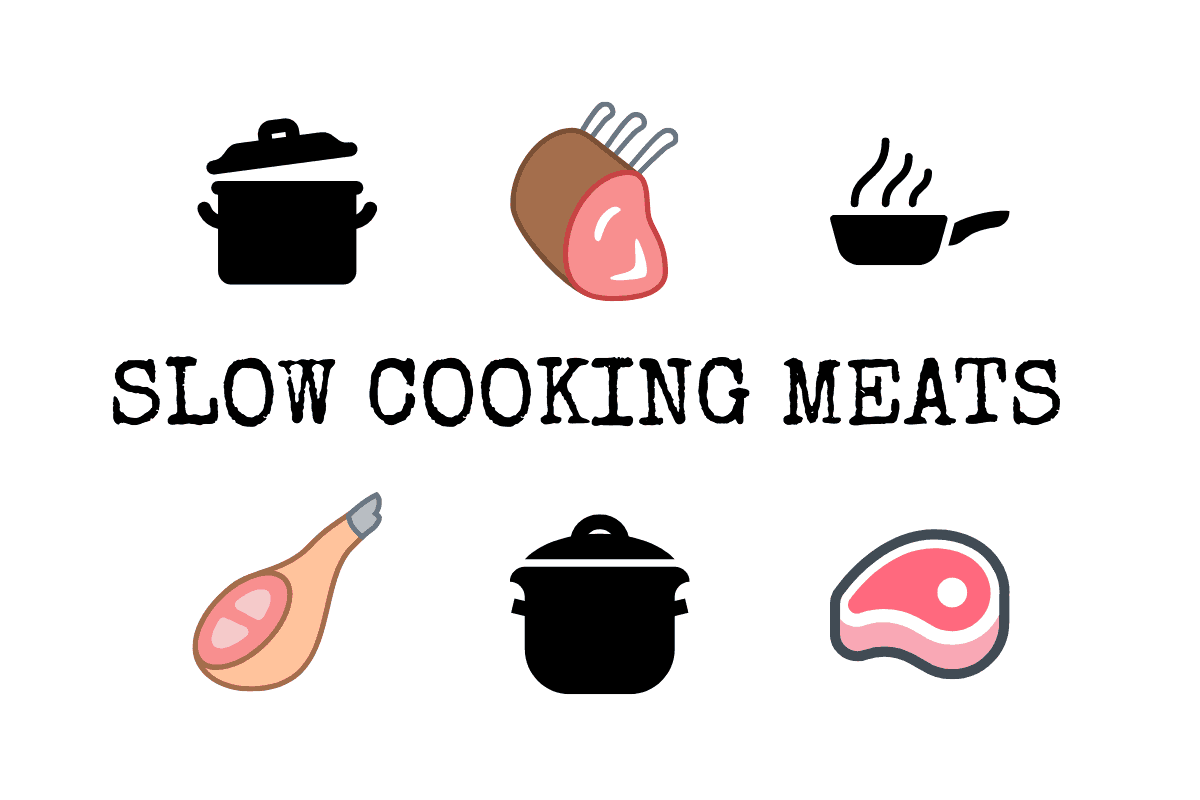 In mid-winter, when the cold chill is upon us, heart-warming casseroles, stews and braises are the order of the day. Your butcher can offer great value on cuts that are perfect for slow cooking. Shin, neck, brisket and chuck are ideal cuts of meat for slow food dishes. A little time spent on preparation and pre-planning pays dividends. Prepare stews and braises ahead of time to reheat to serve.

Slow cooked meals are generally easier to make and very cost effective. Choose cuts of meat that improve in texture and flavour when cooked for long periods of time at lower temperatures. These tough cuts of meat contain large amounts of connective tissue (collagen) which require long cooking times to break down into a rich gelatine.

When cooking meat, collagen begins to melt at about 72 C and this gives a lot of flavour to meats. Collagen also gives a wonderful silky texture. During the cooking process, it is important to liquefy the collagen. This is a kinetic process and is a function of both temperature and duration of heating. The longer cooking times allow the collagen to melt and this adds the lovely flavour to the dish.

Develop a caramelized crust before slow cooking by searing the meat either in a dry pan or with a small amount of oil or fat (tallow is ideal). This adds to the final flavour. Contrary to popular opinion, browning or searing the surface does not seal in meat’s juices. It does, however, produce new and complex flavour compounds as the proteins and sugars react under high temperatures. The surface colour deepens as a result of these reactions. This browning process is known as the Maillard reaction.

The meat is usually browned briefly before braising to produce coagulated residues that will enrich the flavour, body and colour of the dish. Then aromatic vegetables are added, and frequently a bouquet garni: thyme, bay leaf and parsley wrapped in cheesecloth or tied in a leek leaf. The bouquet garni is removed when cooking is done. The vegetables may be replaced with fresh ones toward the end of the process.

The quantity and quality of the liquid used are all-important to the character of the finished dish. Meat may be braised in only a few spoonfuls of liquid or it may be completely immersed. The less liquid you add, however, the more the flavours will concentrate. Always choose a braising vessel that holds the ingredients snugly, thereby minimizing the amount of liquid you need. If your liquid is a good gelatinous stock, your braise will certainly have body. But if you use a thin moistening agent, such as water or wine, the consistency of the sauce will be improved by including a thickening element such as flour or a particularly gelatinous cut such as pig’s foot. Or you can boil the cooking liquid in a separate pan to reduce and thicken it just before serving.

When the meat is cooked, always take the trouble to purify the braising juices, to remove as much as possible of the fat. Fat detracts from both flavour and appearance. Thus purified, the finished dish-whether simple or ambitious-will do justice to one of the most rewarding methods in the cook’s repertoire.

Tougher cuts such as chuck steak, boneless chuck roast, and brisket are popular joints for this technique. While they are unsuitable for oven roasting due to the toughness of the fibres, they become tender and flavoursome after slow braising. As with all braises, slow cooking tenderizes the meat. The liquid exchanges its flavour with that of the beef and this results in tender, succulent meat.

Pot Roast is a method of cooking that uses the cheaper, less tender cuts to best effect. Brown the meat on a hot pan before popping it in the oven. Put the meat in a lidded container with liquid (water, wine, stock) and vegetables (turnip, carrot or vegetables that will stand up to the longer cooking times). Cooking times of three hours or more are not unusual. The results are spectacular in terms of tenderness, flavour and eating pleasure.

Pot roasting and slow roasting prime cuts until they are pink. Tougher cuts should be cooked to well-done. Place the meat in a deep tray or dish with some vegetables, if desired. Pot roasts usually have some liquid, too. The meat is browned first at a high temperature, then loosely covered and cooked slowly for several hours at around 275°F (140°C).

Braising is the general term for all those cooking processes in which meat is slowly simmered in the liquid and vapour of a tightly enclosed vessel. The long, slow cooking produces a gradual and subtle melding of flavours through the medium of the simmering liquid. The cuts of beef best suited to braising are the firm ones from the animal’s working muscles. The leg, shoulder or neck cuts are ideal.

Cuts or roasts are cooked to well done in a covered dish in a slow oven. Braising uses less liquid than in a stew but the steam produced keeps the meat moist. Fatty cuts cook really well this way; very lean pieces benefit from larding. This method is especially good for poultry pieces or slices of pork and lamb shoulder, which cook in about an hour.

The lengthy cooking process breaks down the tough connective tissue that makes these cuts unsuited to more rapid methods. Slow cooking also releases gelatine which makes the meat succulent and the liquid velvety. Once the meat is cooked, purify the braising juices to remove as much fat as possible in order o prevent spoiling of the flavour and appearance.

Irish Stew is a traditional favourite and can be prepared in advance, as can all casseroles and stews. In fact, the experts will tell you they taste better the next day because the flavours have mixed and you are really tasting them at their best. (BTW Irish Stew has to be made from Lamb, otherwise it’s a stew).

The great thing is that they are one-pot meals and can be prepared in advance.

Ask your butcher for his expert advice. You can slow cook amazing dishes for your family and save yourself money at the same time.

Small pieces or slices of meat are browned, covered with liquid and cooked in a lidded dish in the oven or on the stovetop.

Where there is plenty of gravy, dumplings can be cooked in the stew once the meat is cooked.

Electric slow-cookers use very little electricity and can be left to cook all day.

The meat is not browned, so no extra fat is used. A roast or whole bird is completely immersed in liquid (usually water) that is brought slowly to a boil. The temperature is immediately reduced to very low heat so that the water is barely bubbling. Cool the meat in its liquid before straining it off to prevent it from drying out.

Reduce the stock and use it to make a sauce for the meat. Simmering is especially good for meat on the bone as the stock is rich and silky.

Thin strips or small pieces of very tender meat can be cooked in a steamer for very low-fat dishes. Care must be taken to cook the meat enough but at the same time not to toughen it by overcooking. A meat thermometer shows when it is just cooked.

Steamed meat is quite bland so it benefits from adding flavourings. See also sous vide and steam “roasting”.

Ground meat preparations, such as covered terrines, are placed in a dish of water (known as a double boiler) and cooked in the oven— the water ensures that the meat is cooked gently and evenly throughout.

Meat is prepared in the same way as for stewing or braising, but when the lid and pressure cap are put on and the temperature raised, the pressure in the pan cooks the meat extremely quickly, so this is a very economical way of cooking meat. Make sure the pan is cooled before opening the pressurized lid.

Slow barbecue Perfect for cooking meat slowly so it falls off the bone; it can also be shredded. The process is the same as for hot-smoking (see p22), except that damp wood is not used since no smoke is required.

Low temperatures, liquids, and long cooking times ensure that meat stays moist as it cooks all the way through. Slow cooking is perfect for cheaper cuts of meat that may be tough or sinewy; they cost barely half as much as prime cuts. these dishes lend themselves to “getting ahead” since the flavours improve with time.

Most slow-cooking methods start off by browning the meat. Although it is not essential, it always adds lots of extra flavour and colour to the dish.

Make sure the meat is completely dry so that it browns quickly. If meat takes too long to brown, it becomes tough.

Cook the pieces in small batches, making sure they have plenty of space so the outside browns very quickly. If crowded they will release water, which makes them boil rather than brown.

Deglaze the Pan – The frying pan will accumulate a lot of caramelized bits during the browning process.
Add a little water to dissolve them and add this delicious browning to your dish. Otherwise, it may burn onto the pan and taste bitter.

If a stew produces too much fat during cooking, skim off any excess from the top with a spoon or ladle. Start at the centre of the dish and depress the spoon, but do not let any liquid enter it.

Using a circular spiral motion, move the spoon to the edge of the dish where the fat will have accumulated.

Allow the fat to trickle into the spoon and remove it.

Repeat the procedure until you have removed as much excess fat as possible.