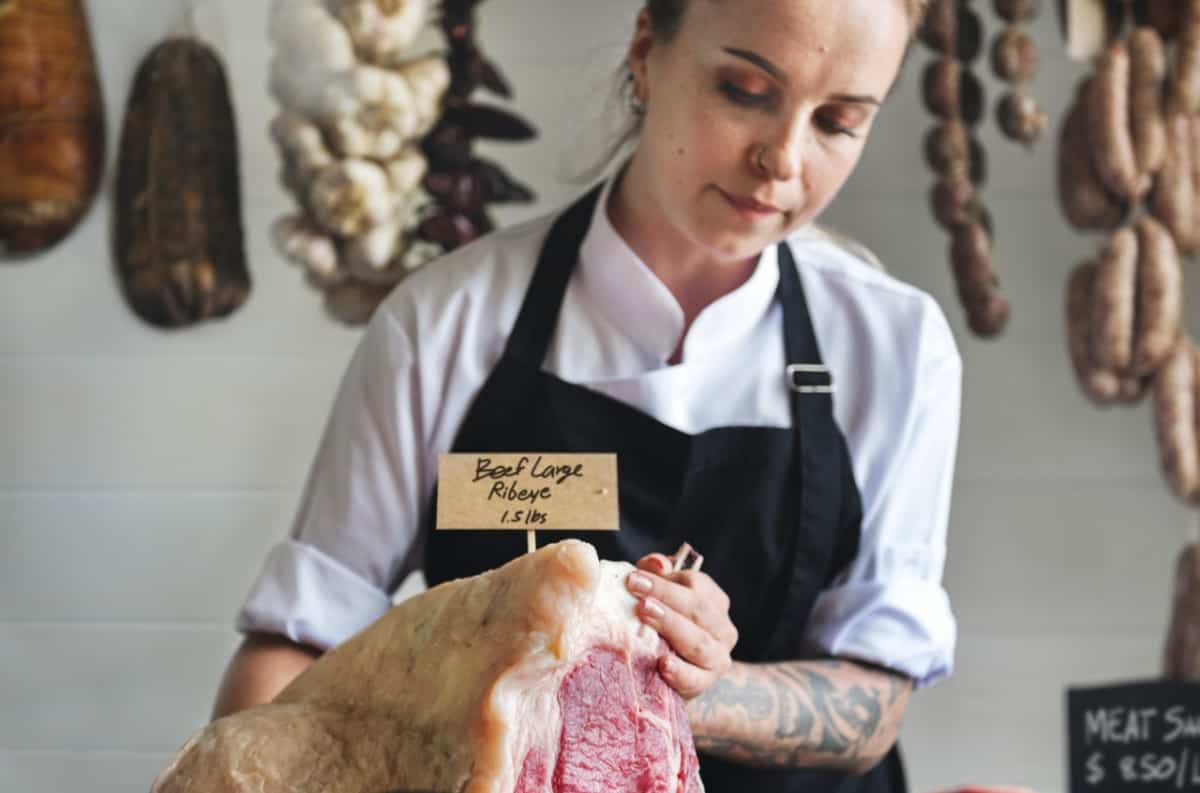 Female butchers are an uncommon sight in butcheries anywhere in the world. Meat cutting has always been seen as a man’s trade. But physical strength aside, how do women butchers compare in this male-dominated industry? Could they, in fact, be better than men in many ways?

These days there are more women working in the meat industry. I believe this is a good thing, as I will detail later. Why the increase in women in the trade? There are a few probable causes. women are no longer stigmatised for being assertive (and rightly so) This helps them deal with the sometimes misogynistic attitudes of their male colleagues. These days fewer stores handle full carcases so physical strength is less of a factor. Women don’t have to lift full quarters of beef. Though many of them are well capable of doing so if required.

Women can bring a different approach to butchering than men. Their advantage is their attention to detail. Their feminine touch (more dainty and delicate cuts instead of the macho chunks of beef their male colleagues prefer) look a lot more attractive to customers, who, as the old saying goes, buy with their eyes.

Women also tend to be better at giving cookery advice to customers. Old school male butchers are experts at selecting meat for its absolute quality, maturing them for the required time, and cutting and displaying. But lack in the “advice” department.  Scant attention is paid to how to cook the product. The butcher’s good work will have been in vain. Women, on the other hand, are capable of preparing meat as well as any man, but they are more committed to helping the customer help themselves.

There are of course some women butchers who want to be more macho or more butch than their male colleagues. Sometimes this is their way of trying to achieve equality. But the unique female perspective on meat cutting and displaying is an advantage. Customers may feel less intimidated speaking with a woman when compared with a know-it-all macho butcher.

Males can learn from their female colleagues but some macho attitudes are hard to break down.

Consider this: my colleague Sean Owens, Team Co-Ordinator for Team Ireland at the World Butchers’ Challenge in 2018, urged team members to “get in touch with your feminine side” for the contest.  The team members kept this in mind when preparing and displaying the side of beef, the full lamb, the side of pork and the five chickens for the contest. Of course, it took some convincing. But the result speaks for itself: Team Ireland won the World Title.

The following are excellent female butchers I have met and others that I know of.

Sarah Kelly and Katie Mcloughlin were recently featured in an Irish Times feature on women butchers and speak frankly about the glass ceiling that exists in some establishments. Both Sarah and Katie are proud of the ancient art of butchery and want to continue to grow and expand their skills base. Provenance, local sourcing and of course quality are paramount in their sourcing. They believe in what they are doing and have established themselves solidly in butchery circles.

Going further afield I met some great female butchers from Italy, Australia, New Zealand, Greece, the UK and the USA during the World Butchers’ Challenge.

Alana Empson was World Young Butcher Champion in 2016 and also attended the 2018 competition as a supporter of the Kiwi team.

Hannah Miller Childs is from the USA and has established herself as a charcutier in Auckland making bresaola, coppa and other delicacies.

Samantha Weller wants to travel the world, while polishing her butchery skills, by learning from butchers with different skill sets. As does her friend Amy Jones.

Jess Leliuga who has many years experience despite her youth and has made her mark on the trade in her home town and as a member of Team GB.

Kyparissia Antonara from Thessalonika was a  last-minute substitute for the Greek team in Belfast when a teammate had some difficulty with a late visa application. She shone through, winning the Best Burger in the World title for Greece.

These committed team members and solo female competitors showed their passion and dedication in spades. And they all acquitted themselves with honour against a predominantly male line-up.

Nazionale Italiana Macellai team member, Mara Labella says there is no great difference now between how women and men are regarded within the butchery sector. Previously it was the case, but she believes the macho stereotype has been overcome in Italy. “Women played a minor role in butchery because the figure of the butcher was totally masculine. Female customers see me behind the counter and are proud of what I represent. As a mother and a businesswoman, I have a lot of experience and this allows me to offer the best advice to my customers; I know what is best served at the table!”

Mara offers the following advice to women working in the industry. “Trust yourself. We possess the skills to be the best in our profession aesthetically, with our touch, in our approach to the customer and the advice we give.”

Mara Labella reckons that the future is about fostering the journey of young people making careers for themselves. “We all have a responsibility to hand on our experiences on to the next generation while encouraging innovation and new techniques.

Joan Gannon Sullivan has a Farm shop in Granard, Co. Roscommon and is married to Peter who supplies Angus cattle from their family farm. I had the privilege of helping to train Joan back in the day and I am delighted to see her attention to detail and insistence on quality is working to make her business thrive.

Some of these butchers expressed a desire to travel and learn new skills from butchers in other countries and anywhere they travel doors will open for them because of their competition successes. But, they will be judged as butchers, their gender won’t be relevant. Good butchers are good butchers, regardless of anything else.

They have a finer hand and their finished products look better

Jessica Wragg is the marketing manager and butcher at London meat merchants.

Turner & George says “it would be lovely to just be a butcher, not a “female butcher.” Because in my estimation, women can be better butchers than men. The standard of the women I know in this industry is incredible. Women are better because they are more approachable, they take their time, and they take more care with what they do. They have a finer hand and their finished products look better.

Jessica Applestone and her husband Josh run Fleisher’s Grass-fed & Organic Meats in Kingston, New York, which is described as “an old-fashioned butcher shop offering meat free of hormones or antibiotics and full of real farm flavour. The couple were vegans for many years and looked into food production in detail before embarking on the butcher shop venture. Josh was recovering from an accident when Jessica suggested some animal protein might speed up his recovery. Now they run Fleishers together and supply some high-end restaurants in the New York area.

Breaking news: Cindy Marlene Garcia has been chosen to join Team USA for the World Butchers’ Challenge in 2020, which takes place coincidentally in her home town of Sacramento.

Cindy travelled to Perth, Australia in April to compete against butchers from around the world and came home with a gold medal. Cindy will take part in the International Young Butcher event in September 2020 at the Golden One arena.

I also notice that on butcher forums and groups, women don’t indulge in putting down everybody’s attempts to improve, as some of the men are inclined to do.

You’ve probably never heard of it but there’s a hugely popular restaurant in rural Thailand named simply “Lady Butcher”. And yes, you guessed it. It’s a meat-focused eatery owned and run by a lady butcher. The focus is beef, and aged beef from all over the world is the speciality. The owner claims that the taste of the meat here will spoil you to the point that you can’t appreciate other places. That’s a big promise. But by all accounts, business is good and the food is excellent. 4.8 out of 5 on Facebook reviews and 4.1 on Google Maps.

There is a great future for women in the meat industry and the best will always surface because, as they say, the cream rises to the top.

So, guys, you better get used to the idea that the ladies can show us a thing or two. It’s not about who can cut faster, the tonnage you can cut in a day, or how big your knife is. As Sean Owens said, “get in touch with your feminine side”