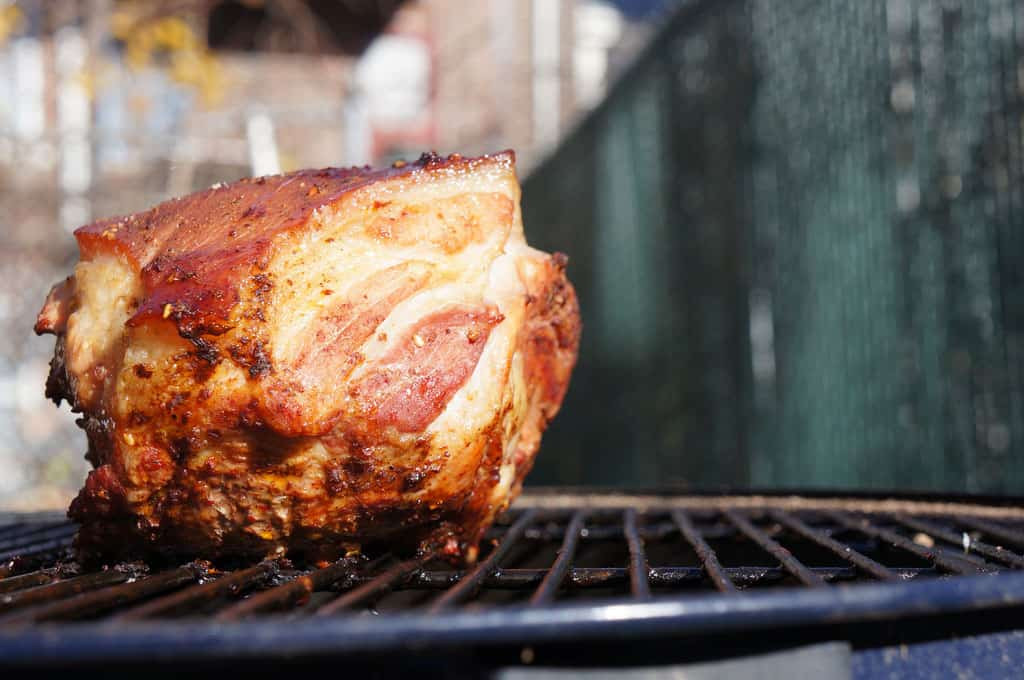 I am constantly amazed at the way roasting pork has almost been forgotten. It was a major part of the business years ago, but seems to have fallen out of favour. A good butcher who used full pigs would make sausages, puddings, hazlet, brawn, pork pies, and a host of other pork goodies that seem to have disappeared. Here’s a delicious pork shoulder recipe that you can prepare with a pork shoulder roast from your local butcher.

Back in the day, a pig would be killed in the autumn as the weather turned cold. Neighbours would come to help and bring a bag of salt. The farmer would slaughter the pig himself or a journeyman butcher would be booked to do the deed. After the pig was eviscerated and the hide scalded to remove the bristles, almost every part of the pig would be used.
Before there was any refrigeration, the whole pig had to be used up fairly quickly or it would spoil. That is how salting and smoking became part of the process. The blood would be used for puddings, and the intestines cleaned out and used as casings. Everyone got a share of the pork and the sausages and in another few weeks someone else would slaughter a pig and the share out would continue.
It is a terrible pity we seem to have lost our connection to where our food comes from.

We roasted a shoulder of pork this week, no fancy rubs, just salt and pepper, no smoking, just plain slow roast.
I have to say this is the nicest piece of meat I have eaten in a long, long time. A great value cut, quite inexpensive, needs about 5-6 hours, but it is really worth it.
After that cooking time, the meat basically falls off the bone and is juicy, tender and has a fabulous flavour.

Talk to your butcher

You will need to go to your local butcher, because the supermarket won’t have this cut. Ask your butcher to score the skin for you so when it is cooked you can break off the crispy crackling (worth the price of the pork on its own).
It is a big piece of meat, up to 6lbs or more, but you will get 3 to 4 meals out of it.
After the pork is cooked you will have a lot of fat and liquid. Save the liquid for gravy and stock, and you can cook roast potatoes in the fat (I told you it was a great value cut).

There are many recipes for this cut but I will give you two : my simple favourite and one with a rub and a sauce. Both delicious.

That is the plain way of cooking and you get the pure pork taste.

Now some people like to have their favourite BBQ rub and this adds a whole other level of flavour to the meat.
I would recommend smoked paprika to give a really authentic BBQ taste.

To Cook
Mix the smoked paprika and salt together. Spread it over the rind and meat.
To make the dressing – heat the olive oil, add the garlic and allow the garlic to just turn golden – no more, tip the oil and garlic into the processor. Add the smoked paprika, scallions, coriander, chilli and whiz for a minute, taste for seasoning. Cooking method same as above.

Serving Suggestions
Serve the pork in thick slices with a spoonful of the dressing. Very good with potato wedges cooked in the oven with the pork, season the wedges with sprinkling of smoked paprika and salt – delicious.
(Recipe from www.BordBia.ie)