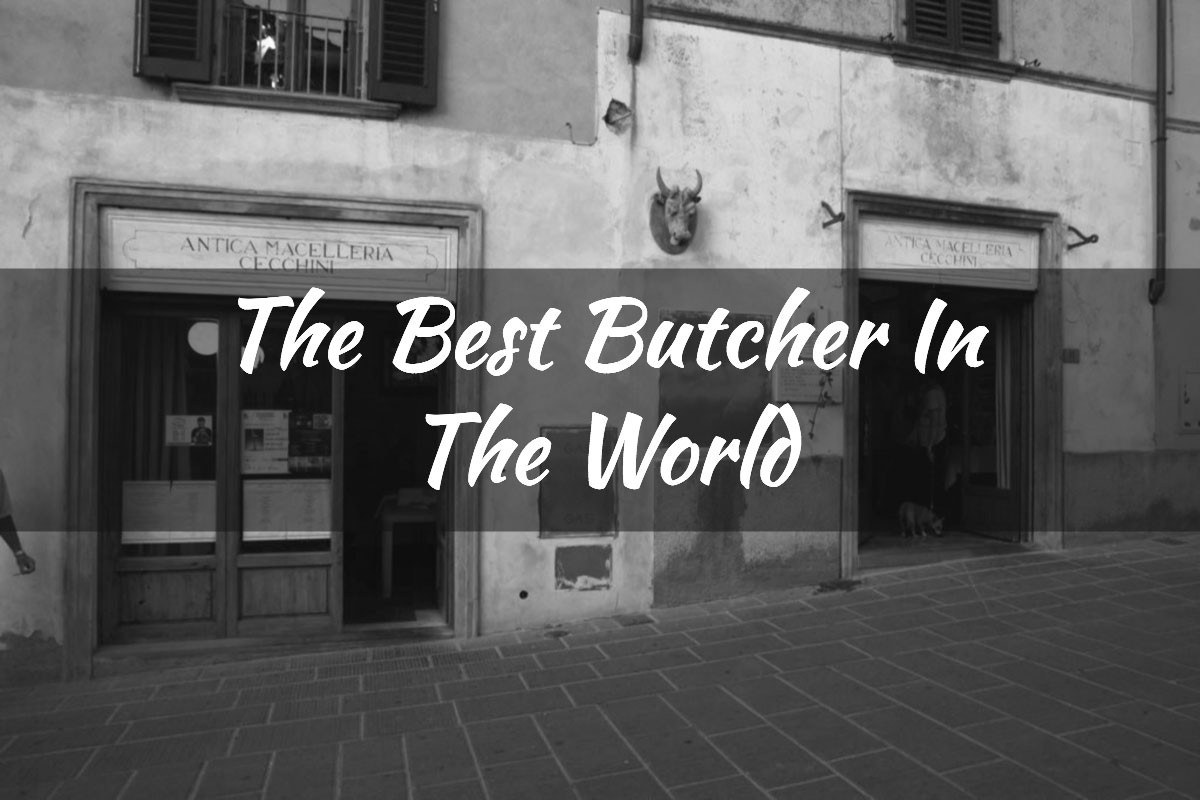 Recently we had the honour and privilege of interviewing Dario Cecchini, regularly referred to as the greatest butcher in the world. Dario has no such notions about himself but he believes fervently in the artisan aspect of butchering.

The important thing is guaranteeing the animals have a good life and honest compassionate death, and being sure that every part of the animal is used well from nose to tail. Then sitting down and enjoying the meal this animal has given us and in turn giving thanks to this animal. This is the important thing.

Dario’s butcher shop is in the village of Panzano (population 1000), about an hour south of Florence and is called Antica Macelleria Cecchini.

The world and its uncle have been known to beat a path to his door. The great and the good speak about him in tones of reverence.

Visitors come to Panzano to visit his shop and restaurant(s) having seen him in live demonstrations around the world or viewing him on TV or the internet.

Dario likes to sing along to AC/DC while serving customers. Bill Buford’s book Heat, is a riveting diary of working as an apprentice in kitchens around the world. But for Cecchini fans, the chapter on the Italian Butcher Chef gives a fascinating insider view into the work of the man in his own business.

The Cecchini family have been butchers for 8 generations and it is rumoured that Leonardo da Vinci and Dante Alighieri were customers of Cecchini butchers in the past.

Always entertaining, always passionate, Dario lives, works and trades according to his own philosophy, believing that butchering is an art and as butchers, we should strive to be the very best we can, with respect for the animals and the meat they provide.

Interested in learning more about meat cutting, butchery, and food preparation
out ButcherCraft, our Online Butchery Course for beginners.

Dario talks about what a true butcher is and represents. In his view, a true butcher shows the utmost respect for an animal. He sees animals as gifts from the gods, to be treated humanely. Compassion is the key.

A comfortable life and a respectful death for the animal that gives up its flesh for consumption should be a driving factor in how a butcher conducts business.

A true butcher knows that his objective is not the pursuit of expansion or profit, but rather to become the master of his own art.

We asked Dario a few questions about his philosophy of butchering.

How do you feel about lab-grown meat?

It’s not meat, it’s something else. If you decide to be a carnivore you must be responsible and respectful towards the animal. If you must waste time creating some like-meat product in a lab, you’re better off eating a plate of pasta.

If you had to eat a raw piece of meat in the wild, what would you pick?

Do you have a favourite breed of cattle?

What’s your favourite cut of meat?

The most “poor” cuts.

If you were training an apprentice what would you start them with?

I’d start by teaching them the great responsibility they have, due to the fact that each cut of meat was once part of a life and so it has the right to our maximum respect.

What are the characteristics of a great butcher?

What is the best butcher shop you have ever seen?

They’re all beautiful when the butchers have the qualities described above.

Offal. Going out of fashion?

No, it’s just that most people don’t know them and don’t know how to appreciate them. I was born and raised in a butcher’s family and I had to wait for my eighteenth birthday to taste my first steak. Before then I had only eaten offal and scraps. My sister and I used to think that the animals had 4 heads, 20 trotters and 4 tails, because that was all that we ate, and we never saw any steaks or filets.

We do what we can with the time we have, obviously stone is best.

What advice would you like to give to the next generation of butchers?

Follow your heart and your passion, and never forget that every piece of meat you cut has been a piece of life. Have the utmost respect for every death. And try to use everything in the best way possible.

We were delighted to have the opportunity to speak to Dario and a trip to Panzano is most definitely on the bucket list.

It is very encouraging to see someone so passionate and connected to his trade expressing a positive outlook for butchers. The mass production and mass retailing of meat has commodotised an excellent natural product without any respect for the animal or the farm where it was raised.

The Best Butcher in the world?

In March 2018, in Belfast, 12 teams of Butchers from around the world competed in the World Butchers’ Challenge with Team Ireland taking the winner’s trophy. The standard of butchering was amazing and the skill and passion shown by all contestants is very encouraging for the future. In 2022, World Butchers’ Challenge will be held in Sacramento, USA and there will be 16 teams competing.

Maybe we’ll meet up with Dario there and continue the conversation.

Image of Dario by Neeta Lind